Getting to Know Jesus: Matthew 3 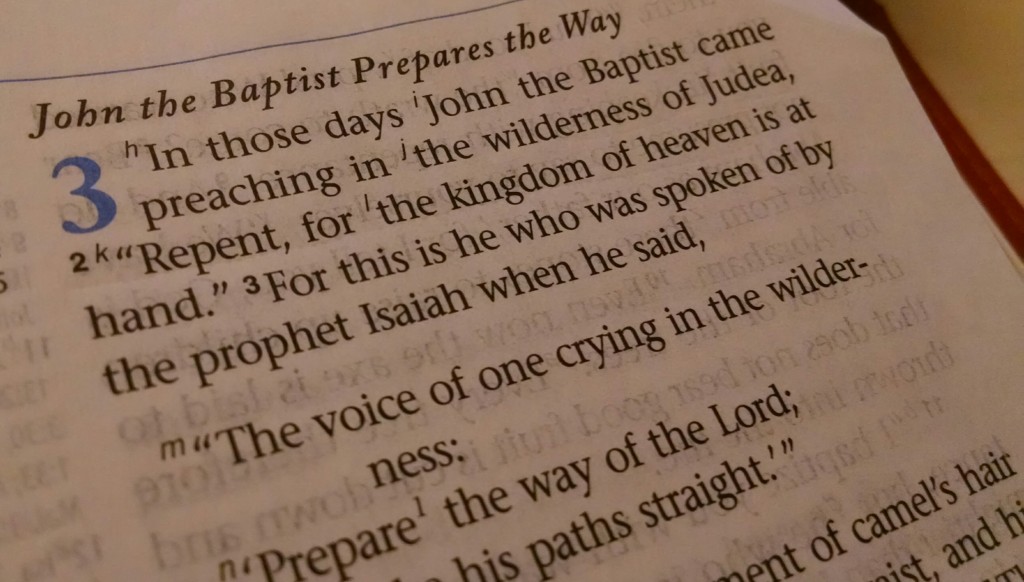 This week as we read in Matthew chapter 3 we see John the Baptist arriving on the scene just as Jesus is about to start His ministry.

The Pharisees claim that they know God because they follow their religion to a T. They know all the laws, they follow all the rules, and they assume that they’re almost perfect for doing so. But actually, John calls them “a brood of vipers” in verse 7. Wow. That’s pretty harsh.

Why would the group of people who had religious prestige and prominence be slandered like this by John? We will read why.

First, we have to remember the cultural context of the day Matthew’s gospel was written and the mindset of 1st century Jews.

Today when we read the Bible, it’s easy for us to assume that the Pharisees and Sadducees are the bad guys in the story. We already know their role. We already know how the book ends. And these guys get it wrong. They crucify the very one they had been waiting for. How bad of a bad character do you have to be for that to be your crime in the story? Pretty bad apparently.

But in the 1st century, the Pharisees and Sadducees weren’t necessarily bad guys to the common Jew.

Jewish people of this day were more worried about the Romans than they were the Pharisees or Sadducees. The Pharisees and Sadducees were not loathed. Not hated. Not avoided. They were moreso respected because they served as the religious scholars of the day, initiating conversation and intellectual thought regarding the law. And though we might think of it as unfortunate that they were the experts of this religion because of what we already know about them, the Jews surrounding them didn’t know to think this way. They didn’t know the end of the story. They didn’t know that the Pharisees and Sadducees were actually getting it wrong.

So it wasn’t ordinary for people to see through the Pharisees’ and Sadducees’ calloused hearts. Most were just as far from God as they were.

But John is different.

He calls them out on their unrepentant hearts as a result of his own mission in preparing people for the Lord. John longs for them to repent and bear fruit as he says in verse 8, so his slander is not meant to be harsh. It’s actually meant to be a loving exhortation towards repentance.

John challenges the hearts of his hearers so that they might be ready for Christ when he arrives.

John’s role is to preach about the coming of the “kingdom of heaven” as indicated in verse 2. For the Sadducees in particular this would have sounded absurd. Historically, the Sadducees are recorded rejecting the belief in an afterlife altogether. So for John to arrive out of nowhere dressed in camel hair, eating wild honey and preaching about heaven would have probably made him appear to be a crazy person to the Sadducees.

And yet, God establishes John the Baptist as a very important character: the one who would prepare people for Jesus’ arrival in the story.

Because of John’s preaching, we read about people responding to this hope of the kingdom of heaven. God positions him as the one who would ready people’s hearts for repentance, as verse 6 describes people coming in droves to confess their sins and be baptized. His role sets the stage for Jesus’ ministry to begin. So as we read in chapter 3 we finally get to meet Jesus through John’s encounter with Him.

What I’m finding is that chapter 3 portrays Jesus as completely opposite of what King Herod had expected. Herod was threatened in chapter 2. Herod wanted him dead. But the Jesus we see here in chapter 3 is very non-threatening.

I’m also finding that Jesus in chapter 3 is quite opposite of what John the Baptist expected.

Reading through this and taking into account all that John had proclaimed about the coming Messiah in the first part of chapter 3, I’m thinking that John the Baptist might have expected a Jesus who was much more intimidating and bold and commanding and charismatic than the Jesus that showed up humbly asking him to baptize Him. After preaching so long about someone “whose sandals I am not worthy to carry” as John exclaims in verse 11 I would have been completely shocked to meet this Jesus so gentle and unassuming. So kind. So approachable.

The anticipation that John the Baptist created doesn’t seem to match the reality that he has been met with. At least so far.

And at times we will see people start to doubt Him as we keep reading because they keep waiting for a powerful ruler to make everything better. Keep this in mind as we will see John’s unmet expectations surface in chapter 11 specifically when he starts to question if Jesus really is the Messiah.

But we will ultimately see the glory and purpose of Christ manifested in this gospel revealing to us why Jesus is so different and why He should be trusted.

So as we read chapter 3 we must recognize how the story is being set up for Christ to enter in and the pivotal role John the Baptist plays in that preparation.

The first 2 chapters we’ve read about so far have led us to this point where the story is settling in this time frame of Jesus’ ministry and the text will begin to follow Jesus more closely.

As we continue on in Matthew’s gospel, let us read Jesus’ words and get to know Him better, while paying attention to Matthew’s particular style and portrayal of Christ in this gospel. Let us read carefully and soak up all it has to say, letting our hearts and minds be receptive to God’s Word. May we fall in love with this Jesus, who may not always fit our expectations but will surely show us why He is so much greater than anything we could ever expect.

John the Baptist is introduced as a character in the story; John the Baptist is described as one who preaches in the wilderness of Judea telling people to repent as the kingdom of heaven is near; Matthew informs us that John the Baptist is the one who Isaiah 40:3-5 prophesied about, as the “one crying in the wilderness” to “make straight the paths of the Lord”; John’s clothes consist of camel’s hair and a leather belt; John eats locusts and wild honey; people in the regions of Judea and Jerusalem come to John to respond and repent; John starts to baptize people in the Jordan River; John sees the Pharisees and Sadducees coming over to where he is baptizing and he calls them a brood of vipers; John exhorts them to bear fruit and repent; John warns them against trying to claim that Abraham was their father; John warns them that if they do not bear good fruit they will be cut down like a tree and thrown into fire; John declares that he baptizes with water for repentance; John proclaims that the one coming after him is mightier and will baptize with the Holy Spirit and fire; Jesus comes from Galilee to meet John at the Jordan River; Jesus comes to be baptized by John; John tells Jesus that he rather should be baptized by Him; Jesus says that this is fitting to fulfill all righteousness; John says okay; as Jesus is baptized, the Spirit of God comes to rest on Him like a dove; a voice from heaven says, “This is my beloved Son with whom I am well pleased.”

Jesus’ ministry is being prepared for by John who is calling people to repentance (v. 1- 2)

Jesus is preached about by John the Baptist (v. 3)

Jesus is mightier than John the Baptist (v. 11)

Jesus will baptize with the Holy Spirit (v. 11)

Jesus will gather his own to himself (v. 12)

Jesus goes to the Jordan River from Galilee (v. 13)

Jesus’ baptism causes the Spirit of God to descend like a dove (v. 16)